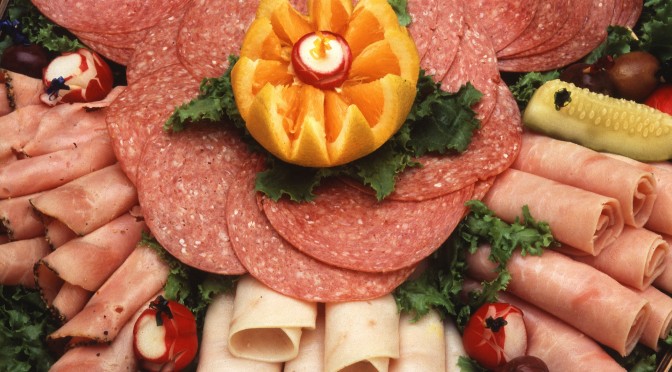 As we’ve seen right here on The French Paradox in the past, strong adherence to the Mediterranean diet may reduce the risk of breast cancer in women. On the other hand, studies have shown that increased meat consumption (one hallmark of a Western-style diet)

is associated with increased all-cause mortality, diabetes, and certain types of cancer (including pancreatic and colorectal).

What is not exactly known is what the effect of poor adherence to the Mediterranean diet in the form of excess meat intake is on breast cancer risk in women.

A new study published in the journal Meat Science aimed to add a little more clarity to this issue by studying the effect of meat consumption on breast cancer in Greek women.

250 newly-diagnosed women with breast cancer (average age 56+/-12 years) were recruited for this study, as well as 250 age-matched controls without breast cancer.

Face-to-face interviews were conducted to obtain information regarding: socio-demographics, clinical, lifestyle, and dietary habits. For meat consumption habits, data for red, white, processed, and grilled meat were collected. Dietary habits were assigned scores based adherence to the Mediterranean diet using the MedDietScore.

The results of this study suggest that eating processed meat, even at frequencies as low as once weekly or as high as once daily, increased

the risk of breast cancer in women, by 2.7 and 2.8 times, respectively. On the other hand, red, white, and grilled meat consumption was not associated with breast cancer risk.

It appears from this study that the only meat linked to increased breast cancer risk in Greek women was processed meats.